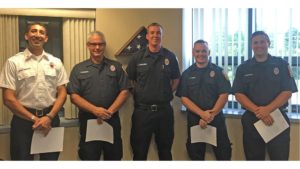 On Friday July 1, 2016 a 911 dispatch alerted the members of Bristol Kendall Fire Department Engine 122 and Medic 144, from Station 2, that a person had fallen off of a roof and was now unconscious and barely breathing. On their arrival they found an adult male that was severely injured from the fall off of the roof of a house. With no hesitation the paramedics and emergency medical technician started the process of trauma resuscitation to initially stabilize the person for expedited transport to Rush-Copley Medical Center. The person was barely breathing and needed an emergency airway put into place. Without hesitation in-line drug assisted intubation was going to be attempted but due to the inability to pass a blade into the airway, a surgical cricothyrotomy was performed and successfully completed within minutes. As the patient was being ventilated the team of paramedics recognized the need to perform bilateral pleural needle decompressions to the patient. As those procedures were taking place other medics initiated two intravenous lines and completed packaging the patient for transport. All of these interventions were completed in the fifteen minutes allotted to the paramedics to stabilize a trauma patient before they had to start transporting the patient for definitive care at a Trauma Center. The end result of their initial care and continued care by both Rush-Copley Medical Center and Good Samaritan Hospital in Downers Grove resulted in this patient walking out of the hospital on his own after spending eleven days in the Trauma Unit.

On Thursday August 11th at the Bristol Kendall Fire Protection District Board of Trustees Meeting, recognition by the awarding of a Challenge Coin will take place along with a Letter of Commendation by Chief Michael Hitzemann to the members of Engine 122 consisting of Lt. Humza Shamsuddin, FF/EMT Randy Roberts and FF/PM Michael Pavlacka. Medic 144 consisting of FF/PM Eric Jones and FF/PM Bradley Christiansen. This was the first challenge coins awarded by the Bristol Kendall Fire Department since the inception of the challenge coin recognition program.